Scott Morrison is now the fifth Prime Minister to deliver a Closing the Gap Report to parliament – the 11th since the Strategy began in 2008. Closing the Gap has aimed to reduce disadvantage among Aboriginal and Torres Strait Islander people, with particular respect to life expectancy, child mortality, access to early childhood education, educational achievement and employment outcomes. 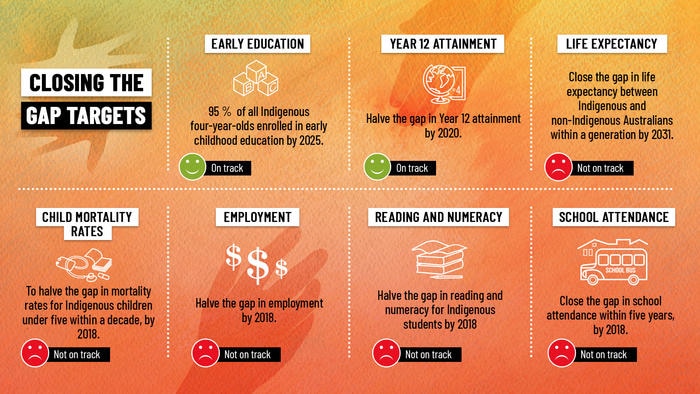 Below are four lessons from the last decade of the policy.

To improve employment outcomes, on the other hand, discrimination among employers needs to be reduced, human capital levels increased, jobs need to be in areas where Indigenous people live and to match the skills and experiences of the Indigenous population. These are solvable policy problems with the right settings and community engagement. But they are substantially more complex.

The most recent estimates, based on data for 2015-17, are that life expectancy at birth is 71.6 years for Indigenous males and 75.6 years for Indigenous females.  While the gaps with the non-Indigenous population of 8.6 years and 7.8 years respectively are smaller than they were in 2010-12, the Australian Bureau of Statistics (ABS) and most demographers suggest extreme caution around the interpretation of this change “as the population composition has changed during this period.”

More people have been identifying as being Aboriginal and/or Torres Strait Islander over recent years. What’s more, these newly identified Indigenous people tend to have better outcomes on average, across health, education, and labour market outcomes, than those who were identified previously. This biases our estimates, making it appear that there is more rapid progress than there might otherwise be.  The Closing the Gap framework was implicitly designed around improving the circumstances of the 2008 Indigenous population relative to the 2008 non-Indigenous population. However, both populations have changed substantially over the intervening years, as there has been growth of the non-Indigenous population due to international migration.  It is hard to measure and track differences in changing populations.

For other indicators, such as employment, the data is available far less frequently than it could be, so we are less able to judge the effect of individual policies and interventions. However, the sophistication and nuance with which data in the Closing the Gap reports have been presented have improved considerably.  It seems most policies prioritise Indigenous Australians living in remote areas than those in the city.

Unfortunately, the policy responses of government often don’t get that balance right.  Take the signature policy proposal announced with the current report – a suspension or cancelling of HECS debt for teachers who work in remote schools. What the policy ignores is that the vast majority of Indigenous students live outside remote Australia and that outcomes for Indigenous students in non-remote areas are well behind those of non-Indigenous students.

The current report and speech by the Prime Minister states that “genuine partnerships are required to drive sustainable, systemic change” and that the government needs “to support initiatives led by Aboriginal and Torres Strait Islander communities to address the priorities identified by those communities”.  These are admirable goals. But they require significant resources, a genuine engagement with the evidence, even if it isn’t positive, taking the Uluru Statement from the Heart seriously, and really ceding control to Aboriginal and Torres Strait Islander peoples.

By making a donation, volunteering or becoming an ambassador you can contribute to the important work that the Centre does in promoting women's health and wellbeing in our community.